This guide helps federal agencies understand how federal issuers and Non-Federal Issuers (NFI) of PIV-Interoperable (PIV-I) achieve interoperability with the PIV infrastructure. The scope of this guide is limited to the issuance of PIV-I credentials. Federal departments and agencies must continue to make their own authorization decisions to allow or deny access when using a PIV-I credential for authentication.

Federal agencies are interested in issuing and acquiring identity credentials and credential services that are not Personal Identity Verification (PIV) credentials, but rather are:

PIV-Interoperable (PIV-I) was created to meet this need. PIV-I shares the same technical standard as the PIV credential standard, Federal Information Processing Standards (FIPS) 201. Prior guidance neglected to address the issuance of these PIV-I credentials by federal agencies, requiring additional guidance for all issuers. The main difference between PIV and PIV-I are PIV credentials are required to have common, minimum personnel vetting assurance as specified in Federal Information Processing Standard 201. Individuals with PIV-I credentials assert no personnel vetting assurance in a baseline, standardized manner. PIV-I credentials may be appropriate for situations where an agency has determined that a PIV credential is not warranted, but the individual requires access. Such situations may include, but are not limited to:

This guide advocates a set of minimum requirements for PIV-I credentials that the Federal Government can trust and details solutions to the four barriers to interoperability that currently challenge the government. These four barriers are as follows:

For additional information on PIV-I, please contact fpki at gsa.gov.

This guide is limited to describing PIV-I. Federal agencies make a risk determination to accept any credential, including PIV-I, for access to data, applications, facilities, and networks. Additionally, this guide does not address the use cases for other types of non-PIV credentials. PIV-I is used to overcome barriers to federal reliance on identity credentials, which are defined as interoperable with PIV. Four specific areas of concern are addressed.

A minimum set of requirements is described for each area to allow identity credentials to technically interoperate with the federal government PIV systems.

Table 2: Scenarios of a Federal and Non-Federal of PIV-I Credentials

Figure 1 outlines the identity assurance services and components, the authenticator assurance components, and the NFI versus Federal Issuer distinction. Figure 1 shows two (2) certification authorities and two (2) registration, credential management, identity proofing, and lifecycle service components for each scenario to illustrate that any one individual Certification Authority system may have more than one Registration Authority system, and vice versa.

Figure 1 is used in later sections of this guide to identify the auditing and security requirements applied to each scenario. 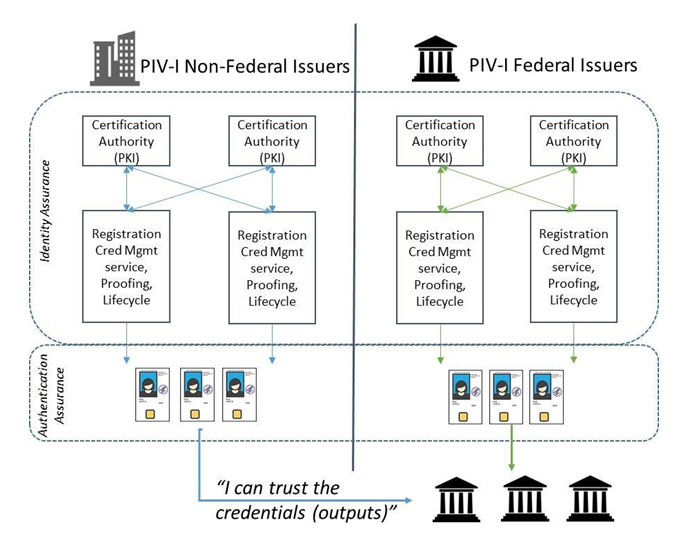 The fundamental purpose of an identity credential is to establish a trust foundation based on:

Therefore, PIV-I credentials must be issued in a manner that provides the Federal Government with a commensurate level of trust for identity assurance and authenticator assurance. Personnel vetting assurance may not be determined from a PIV-I credential.

For Federal Issuers of PIV-I, the full list of requirements for identity and authenticator assurance is in the X.509 Certificate Policy for the Federal Common Policy Framework.

For NFI of PIV-I, the full list of requirements for identity and authenticator assurance for PIV-I credentials is in the X.509 Certificate Policy for the Federal Bridge Certification Authority.

The PKI certificates are where the identity assurance and authenticator assurance are asserted during use in networks, facilities, and systems. All PIV-I identity credentials must contain certificates issued from one of the Certification Authorities which operate under a Federal Public Key Infrastructure (Federal PKI) Certificate Policy listed above.

Within this boundary of more than 100 existing and audited Certification Authorities, there are options operated and available for direct use by federal departments within the Executive Branch. There are also certification authorities which are operated for non-federal executive branch entities including legislative and judicial branch agencies, and state, local, tribal, territorial, international, and commercial partners.

The certificate policies extension Object IDentifier (OID) contained in the certificates asserts the identity assurance of the person presenting the credential and certificate, how the private keys are stored and managed, and how the certificate should be validated for usage.

PIV-I credentials may be appropriate for situations where an agency has determined that a PIV credential is not warranted, but the individual requires access. Such situations may include, but are not limited to:

A standardized set of procedures and processes for personnel vetting assurance covering any or all of these possible use cases is outside the scope of this guide.

Basic technology requirements must be met for identity credentials to interact with the Federal Government’s PIV infrastructure. PIV-I credentials must conform to NIST technical specifications for PIV credentials, as defined in:

Further clarification of the NIST Special Publications is required to address:

PIV-I credentials shall contain distinctive markings to indicate the issuing entity and shall be visually distinct from PIV credentials. Common options for visual distinction include being printing in a horizontal (landscape) layout versus a vertical layout, or displaying PIV-I in one of the optional printed fields. The horizontal (landscape) layout is recommended to promote consistency in visual distinction.

PIV-I is Visually Distinct from PIV

The Federal PKI Policy Authority is considering a change where a federally-issued PIV-I may look the same as a PIV. If this is passed, only NFI PIV-I are visually distinct from PIV.

Effective use of PIV and PIV-I credentials requires one or more identifiers to support the interoperability and use in distributed systems across the Federal Government. PIV credentials include a number of identifiers which can be used to link the credential to accounts in Physical Access Control Systems (PACS), networks, and applications. These identifiers include, but are not limited to:

PIV-I credentials have these same requirements for identifiers. The CHUID and FASC-N remain elements of the PIV Data Model and these elements may still be in use in legacy physical access control systems for account linking purposes.

There are additional challenges for PIV-I credentials. For example:

For these reasons, the FASC-N requires specific attention for PIV-I credentials.

Requirements for the FASC-N are:

PACS may erroneously check that the FASC- N is populated with non-“9” values and attempts to validate a PIV certificate extension policy OID instead of the PIV-Interoperable certificate extension policy identifier. Agencies using a Federally issued PIV-I should verify their PACS configuration before choosing to populate the Agency Codes, System Code, and Credential Number.

Table 3 outlines the different scenarios for issuers of PIV-I credentials, the portion of the FASC-N values impacted, and potential issues.

In all scenarios, it is recommended that agencies update their PACS to use the Card UUID value for PIV-I account linking.

Federal agencies have identified the need to clarify the differences between:

This section helps clarify these differences and the boundaries for federal agency Chief Information Security Officers.

There are four primary documents referenced for security controls and audit requirements for the systems responsible for issuing either PIV or PIV-I credentials:

For auditing, the Federal PKI requires:

The audits are performed by third-party independent auditors in which audit results must be submitted to the Federal PKI on an annual basis. In addition to the third-party independent audits, both the certification authorities and registration authority systems must submit compliance reports to the Federal PKI Policy Authority on a recurring basis, such as:

These sample artifacts are used to perform compliance inspections on the outputs of the systems in addition to the management, operational, and technical controls which are also inspected during the audits. Non-compliant sample artifacts are reported to the certification authority, registration authority, or federal agency and remediation of non-compliant elements must be addressed or the entities will lose their compliance certification.

The audits and the compliance or non-compliance of the certification authority or registration authority components are used by the Federal Government, other public sectors and international, or commercial entities to assert a number of claims on websites, product documentation materials, memorandums, or contracting documents. These claims often include:

When asserting these claims, the audits and the associated processes and procedures are establish the capability for federal agencies to trust the outputs and the credentials issued from the systems.

Figure 2 shows the boundaries of the Federal PKI audit and compliance activities. 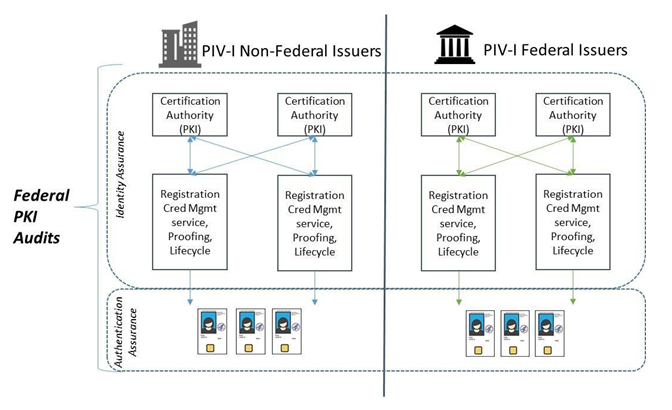 A FISMA ATO is a separate and distinct assertion. The Federal PKI audits and processes do not assert that there is a Federal Government Designated Authorizing Official or continuous monitoring requirements in place for all certification authorities or registration authority components.

Although the NFI of PIV-I may operate and have continuous monitoring that are commensurate with commercial best practices, the federal agencies are still required to assume responsibility for any government data placed into systems which are bought, built, or used.

Prior to directly placing any PII in a service used to issue and manage PIV-I credentials or procuring any such service, federal agencies are required to confirm and request:

Figure 3 shows the notional system boundaries of the required FISMA ATO for federal agencies and issuers of PIV-I credentials. 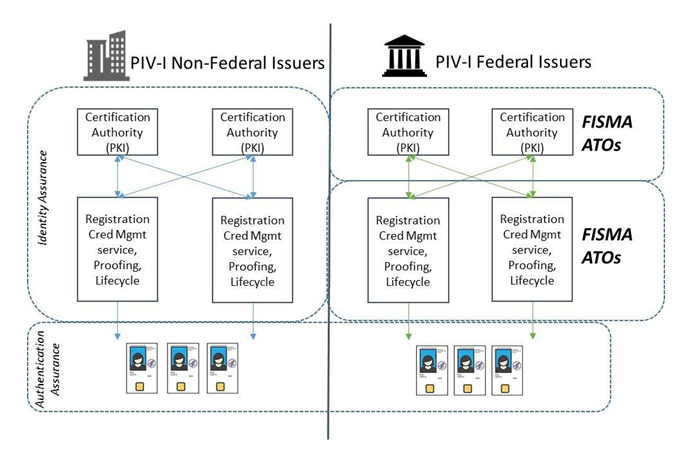 When contracting either through interagency agreements or commercially sourced PIV-I services, federal agencies may have several choices concerning the extent of the service. As a federally-contracted service storing PII of persons under the authority of the federal agency, all contracts and procurement language must include the requirements to:

The System of Records Notice (SORN) should also be taken into consideration. Many agencies should, wherever possible, be able to leverage the SORN associated with the issuance of PIV credentials for PIV-I credentials, since the purpose of PIV-I issuance is within its scope.

This appendix provides additional technical information in support of the technical requirements. The following table provides a comparison of the requirements for each credential type.