The Federal PKI (FPKI) is a network of certification authorities (CAs) that are either root, intermediate, or issuing CAs.

Any CA in the FPKI may be referred to as a Federal PKI CA. The two highest level CAs in the FPKI hierarchy are the FPKI Trust Infrastructure CAs, which are operated and managed by the Federal PKI Management Authority (FPKIMA) Program Office:

COMMON serves as the root and trust anchor for the intermediate and issuing CAs operated by federal government Executive Branch agencies.

Public trust for websites
A new effort is in the planning stages to establish another federal government root and issuing CAs dedicated to Public Trust Transport Layer Security (TLS) device certificates. Follow or contribute to the development of the federal government's new certificate policy for this public trust effort at https://github.com/uspki/policies.

The Federal Common Policy CA may be referred to as the FCPCAG2, or as COMMON in documents. As the FPKI root and trust anchor for the federal government, the FCPCAG2 supports government person trust and a small number of agency intranet enterprise devices, including Personal Identity Verification (PIV) credentials. The FCPCA’s design enables any certificate issued by any FPKI CA to validate its certificate path to a single root CA.

The FCPCAG2 root certificate is included in the trust stores for some platforms such as Adobe. Other platforms, such as Microsoft, Mozilla, and Apple, do not include the FCPCA by default.

The CAs with certificates signed by the Federal Bridge CA G4 are cross-certified. These CAs have established a trust relationship with the FPKI and are audited annually for conformance to the certificate policies. This cross-certification process has extended the reach of the FPKI well beyond the boundaries of the federal government. 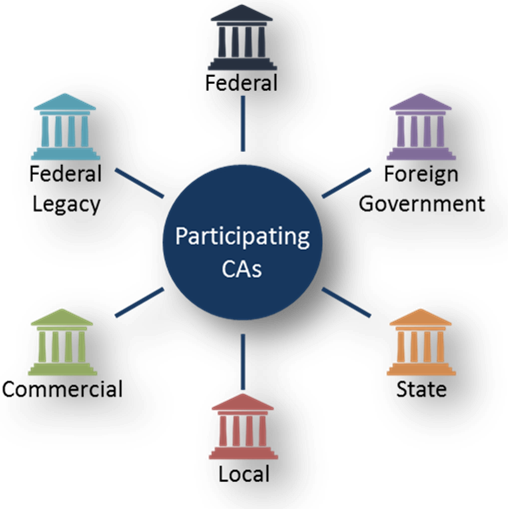 A CA that is part of the FPKI is called a participating certification authority.

For historical records, we might label or identify CA systems using a category that shows when the system was established and for what types of communities it is or was used.

We realize all the acronyms and labels may be confusing and welcome your input to help us improve, add information over time, and simplify where needed.